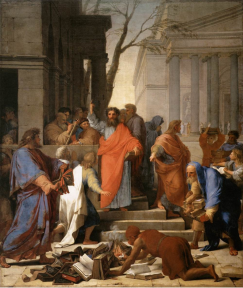 “Let other sing of knights and paladines”,

First use in the English language, Samuel Daniel, Delia XLVI, 1592

From the Old French palatin and Latin palatinus

“The Paladin is a class of Warrior that is fully devoted to kindness and ridding the Universe of Evil. They are very religious, and have an extremely strict honor code.”

“A Leading Champion of a Cause”

What is a Modern Paladin?

The word "Paladin" is most directly derived from Medieval French, but that was in turn taken from Italian and Latin.  Applied to the 12 peers of Charlemagne, some of the many definitions include a brave and loyal knight, a trusted advisor, and holy warrior.  This is the goal and the point of the book "Modern Paladin", available everywhere by the end of 2017.  In essence, the Modern Paladin is a 21st century Holy Warrior, a defender of the Word, a protector of the faith, and a guardian of those who may be younger or newer or weaker in the faith.  Unlike the physical armor and weapons adorning the original Paladin, ours are the Full Armor of God as described in Ephesians 6, a spiritual and mental discipline.  Certainly, a simplistic description would be a Christian Church Leader or Bible Scholar, but that falls short of fully describing a Modern Paladin, who must be a discipleship trainer with a focus on Biblical authority, the Armor of God, Spiritual Warfare, church history, and sound doctrine.  He or she must be prepared to "study to shew thyself approved unto God, a workman that needeth not to be ashamed, rightly dividing the word of truth" (2 Tim 2:15).  In preparation for daily battle with the enemy both in media and verbal form, as well as in our hearts and souls, we train to "be strong in the Lord and the Power of His Might" (Eph 6:10).  As a ministry, we strive to mentor these ideals and model this behavior.  Many churches and bible study groups comfort each other within community (which is always needed), and study the Word (which is always good), yet without touching upon the dangers of the fallen world and the continual attacks meant to degrade the Holy Bible.  Even well-meaning Christians make these mistakes, and the common world knowledge of the Bible's history and truth has been dilluted into obscurity.  Our mission is to uphold the Bible as inerrant truth, dissuade or defeat its opponents, and defend the honor and glory of Our Lord and Savior (as well as His people) from any and all attacks.  This is why the word "warrior" is used; and our arena is a media savvy, technological behemeth known as the modern age, hence:  MODERN PALADIN.